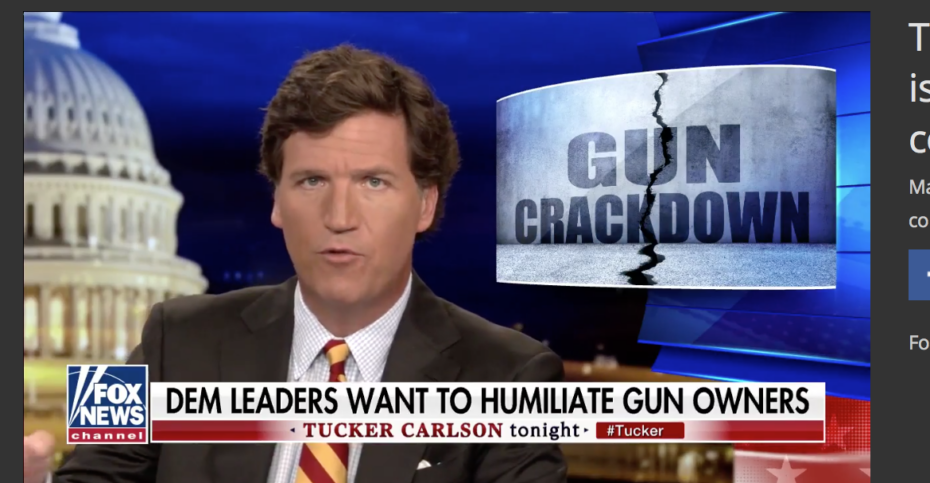 In our last post (here), we explored Tucker Carlson’s questions about the Biden administration’s attack on the 4th and 2nd Amendments via a case now at the Supreme Court known as Caniglia v. Strom.

In response to the rhetorical question he asked — how could this happen in America?  We noted this approach is not new.  It started 8 years ago in New York State with something ironically called the SAFE Act (Secure Ammunition and Firearms Enforcement Act of 2013).

Recall what we know about New York State’s SAFE Act:

Last week, in Part 1, we promised to explore real life stories of the SAFE Act; and what happens when citizens are denied due process.

What Really Happens to Citizens Rights?

Our story begins with a New York citizen, 68 years old, who served in the Air Force, and had a long career as a facilities manager for a large school district.  He legally held a New York State pistol license for 44 years with no issues.  It all came tumbling down in 2015 when a hospital sent an incorrect (false, fraudulent?) notice to the NYS Police that he was INvoluntarily committed.  State Police showed up at his door with no notice and seized his firearms.  The rest is history for many citizens in New York State.

This story might have had a happy ending because the citizen invested time and money to retrieve his rights.  After a long year of legal work, a County Judge signed a court order in 2016 reinstating his pistol license, finding “no cause” for the state’s action.  BUT not to be outdone, New York State put him on the “Deny” list of the National Instant Check System (NICS); and refused to correct the record.

The ”Deny” designation on NICS meant he could not purchase a firearm — even though his “license to own” had been returned to him.

When our citizen inquired why he could not purchase a firearm after the return of his pistol license, the FBI advised him he must clear his NICS “disqualified” status with the SAFE Act agency in Albany, apparently operated by the State Police, and known as the Office of NICS Appeals and SAFE Act.

The SAFE Act agency suggested the citizen ask the hospital to provide proof that his admittance was voluntary.  Guess what?  The hospital did it — and confirmed in writing that his admittance “should not have triggered a report to NICS or through the SAFE Act.”   Despite meeting the SAFE Act agency’s request for proof — state government still refused to clear this citizen’s status with the FBI.

In a one-page, single-space “Applications For Certificate Of Relief From Disabilities Relating to Firearms,” state government told the citizen he must submit still more paperwork on topics ranging from his “psychiatric history” and “criminal history information” going back 20 years.  This document also claims it “may … request … a clinical evaluation and risk assessment” among other information.  A reasonable person can conclude the state’s process is intended to arrive at one destination – continued denial of a citizen’s constitutional rights.  In other words the system is rigged.

The citizen then hired a second and different attorney.

This attorney told the New York SAFE Act agency he would take them to court via a lawsuit.  Game over, the citizen’s rights were reconfirmed and his “deny” or disqualified status on the NICS system was removed.  His right to purchase and own a firearm was fully restored.

I suspect the New York State agency did not want to engage in a legal “discovery” process that would expose more snakes under the rocks.

The third topic broached by Tucker on his 5-minute segment was ASSAULT weapons.  Next week, we will pick up that subject and look at the fascinating political etymology of the term “Assault Weapons.”   For Dart Mouth grads such as the lawyers club at the PowerLine Blob, that means we’ll explore the political origin of the term ASSAULT WEAPON.