Can Journalism Be Saved?? Is Juice Worth the Squeeze? 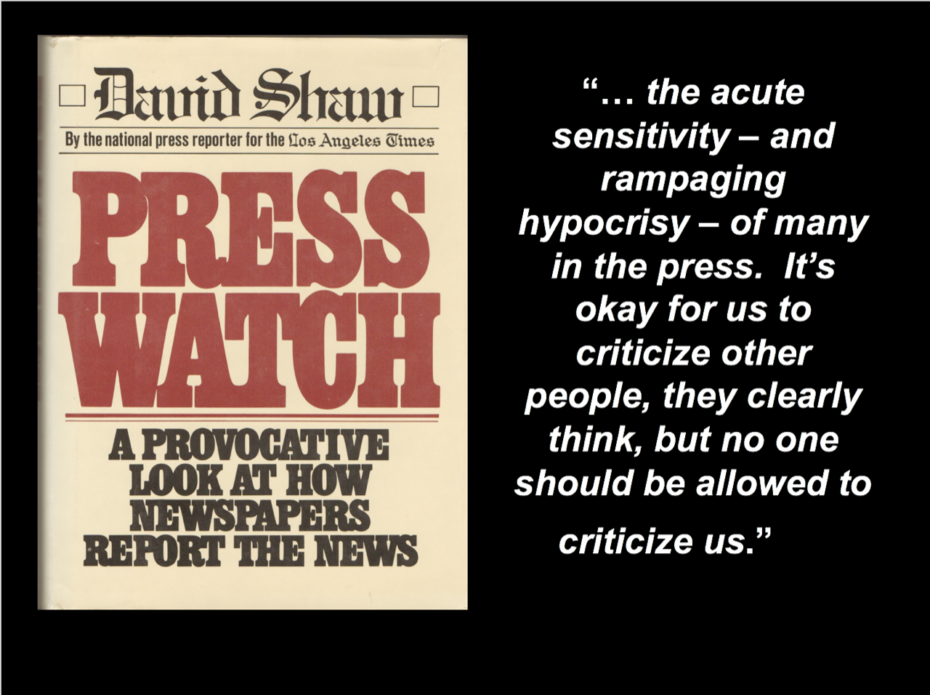 One of my favorite role models among all of the press is David Shaw, Pulitzer-prize-winning media critic for the Los Angeles Times, who died in 2005.  He repeatedly warned the press was not doing a good job of holding itself “morally accountable for its actions.”  We need far more David Shaws and fewer journalists of the type who predominate today — like Jim Acosta and Glenn Thrush — who don’t believe they are morally or ethically accountable.

“We are in the age of transparency in journalism,” said Tom Rosenstiel, former director of the Project for Excellence in Journalism and a former colleague of Shaw’s at The Times. “David was the first guy outside washing the windows.“

Ironically, Shaw’s obit in the. LA Times acknowledged that many of his co-workers shunned him — even after he won a Pulitizer Prize.  Why?  Shaw reported on fellow journalists — without fear or favor, as they say.  That is a big no-no; violates “union rules,” so to speak.

Another excellent role model is Richard Harwood, a reporter, editor and the first ombudsman at The Washington Post (who died in 2001).  How many of today’s journalists and media lords even remember Shaw and Harwood.  Both still have lessons to teach journalists and citizens.  For example, Harwood wrote an illuminating opinion piece in 1998 titled, “How Lies See the Light of Day.” In it, he wrote provocatively that journalism has “ambiguous standards.”  Wow.  How many media lords will admit that?  [Emphasis added]:

Journalism has changed — and not for the better.  Even more interesting, there is data on this.  Twenty-two years ago, a joint study was published by the Committee of Concerned Journalists and the Pew Research Center for the People & the Press.

The 1999 joint study on journalism is brutally direct.  It indicates the press has struggled with its role and its ethics for decades.  Key drivers of the survey — Bill Kovach and Tom Rosenstiel — note the following (emphasis added):

Journalists didn’t understand it then, and they understand it even less now.  The core problem then and now is credibility.  How could they miss that?!

I am not sanguine about the future of the press or social media.  But perhaps that is too dour.

Impressed with the depth of the 1999 survey of journalists and curious as to whether there has been any additional tracking or follow up, I reached out to Tom Rosenstiel, who with Bill Kovach, was a key driver of the survey as well as a co-author of the prescient Elements of Journalism (© 2001).

He replied:
“I certainly never replicated the 1999 survey, which I designed with Andy Kohut for the purposes of writing Elements [of Journalism].  Such surveys are expensive, but I can bring it up with my new research partners at AP-NORC (which is a group out of the University of Chicago). It’s an interesting idea. They could price it out.”  [NB:  Kohut was founding director of Pew Research Center who died in 2015.]

“But economically the picture for the [Washington] Post, [New York] Times and WSJ is now much better. They will survive. They will even thrive. We will have good national newspapers.  In that sense journalism is not dying. But it is becoming more partisan, and alarmingly a significant part of the American population is being fed a pack of lies by political propaganda sources that are not journalism. Or they are the worst kind of journalism.”

This is where the 1999 National Survey of Journalists rings a loud bell.

Fourteen years ago — 8 years after the survey — Paul Steiger, former WSJ managing editor, ended a 41-year career in journalism; and captured the shock that comes with transformations.  He wrote a farewell account of the newspaper industry transformation.  It was a front page article:

“Today, all around me is an industry in upheaval, with slumping revenues and stocks, layoffs, and takeovers of publishers that a decade ago seemed impregnable.”

Impregnable indeed.  Change has changed — not up/down biz cycles — but massive and fundamental change; a shift in power that challenges the status quo … that once seemed impregnable.

Consider that the core problem of journalism is credibility.  That prescient book, as I call it — The Elements of Journalism — states, “In the end journalism is an act of character.”

Therein lies a very challenging test.  What can industry and citizens do to improve that act of character called journalism.  And is the juice worth the squeeze?

In part 2 of our post next week, we’ll look at this issue.