If Journalism Is “an Act of Character,” — Describe its Character Today 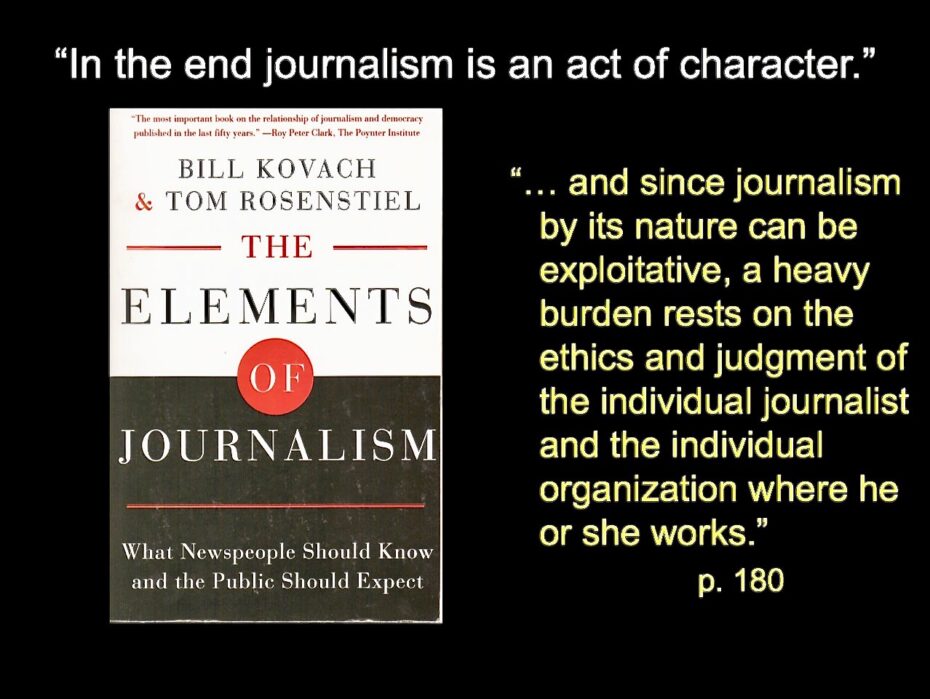 Are there any worthwhile role models in the press today?  Any best-in-class examples of journalists we might honor?

In part one of this post here, I wrote about two principled heroes of mine in journalism — David Shaw and Richard Harwood, both dead.  But who are today’s role models?

Lester Markel, journalist and scorching advocate of press freedom wrote (emphasis added):  “Talk about freedom of the press and freedom of information is being worn thin. There is too little said about the obligations of the press.”

Wow.  The press has obligations?  What might those be?  When is the last time you heard someone in the press speak of its obligations?

Eason Jordan, formerly head of CNN News when its brand promise was “the most trusted name in news,” wrote a NYT op-ed piece published in April 2003 — “The News We Kept to Ourselves.”  In it, he admitted that CNN had suppressed the news out of Iraq under Saddam Hussein for 12 years (YEARS).  Did not report the killings, the torture. He said he feared for the safety of CNN employees — but for 12 years “the most trusted name in news” could not figure out a plan to deal with a situation he said he “felt awful” about.

This staggering admission of censorship by the press on behalf of a murderous government stirred virtually no qualms of conscience among journalists, nor follow-up news coverage.  What happened to the journalistic promise “speak truth to power?”

It gets better. That same year, Brian Williams spoke at a luncheon gathering of business folks. Yes, 2003 and Williams had recently returned from Iraq with harrowing stories of US troops (and himself) under fire — which he later had to withdraw because it was a lie.  During the Q&A, I asked him to comment on Eason Jordan’s op-ed piece.

I will never forget his response. Standing in front of the audience, Williams held his chin in his hand, studied the ceiling, then the floor and finally pronounced: “I don’t know why Eason wrote that [NYT op-ed]. He must have been feeling very introspective.” Cue Peggy Lee: “Is that all there is?”

Two years later, Jordan resigned from CNN after 23 years there, as Howard Kurtz reported, “in an effort to quell a burgeoning controversy over his remarks about U.S. soldiers killing journalists in Iraq.”

Kurtz’s Washington Post account added this:  “Several CNN staffers say Jordan was eased out by top executives who had lost patience with both the controversy and the continuing published gossip about Jordan’s personal life after a marital breakup.  Jordan’s authority already had been greatly reduced after a management shakeup.”

This was an oblique reference to an affair between the married Jordan with two kids and Mariane Pearl, widow of Daniel Pearl, South Asia Bureau Chief of The Wall Street Journal, who was kidnapped then beheaded by Islamic terrorists.

Contrast Eason Jordan with British journalist John Burns — two-time Pulitzer prize winner for foreign reporting for the NYT.  Burns retired in 2015 after 40 years as a correspondent for The New York Times, during which he reported from 10 foreign bureaus.

He actually reported how Saddam had turned Iraq into a slaughterhouse. Read his scathing assessment of his journalistic colleagues in “The Moral Compass of Iraq,” pp. 155-184, from the book, Embedded — The Media At War in Iraq, edited by Bill Katovsky and Timothy Carlson. Among other comments, Burns said: “There is corruption in our business. We need to get back to basics.” 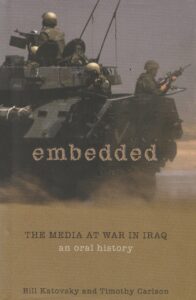 Following are excerpts from Burns section of the book. [Emphasis added]:

“Without contest, I was the most closely watched and unfavored of all the correspondents there [in Iraq] because of what I wrote about terror whilst Saddam Hussein was still in power. … I described how Saddam had turned this country into a slaughterhouse.  Where he might have been responsible for the deaths of as much as a million people. … I felt that that was the central truth that has to be told about this place.  It was also the essential truth that was untold by the vast majority of correspondents here.  Why?  Because they judged that the only way they could keep themselves in play here was to pretend that it was okay. …

“Senior members of the [Iraq] information ministry took hundreds of thousands of dollars of bribes from these television correspondents who then behaved as if they were in Belgium.  They never mentioned the function of minders.  Never mentioned terror.

[Referring to journalists who present themselves as heroes]:  “As a matter of fact, I think this vainglorious ambition is part of the same problem really.  It is the pursuit of power. Renown. Fame. … There is corruption in our business.  We need to get back to basics.”

And the press wonders why public trust in what it does has been declining for more than 20 years.  And yes, the press has changed; and the juice is probably not worth the squeeze.

But if journalism is an “act of character,” how many can describe its character today?

Fans of PowerLine should feel free to share this website link in a comment on PowerLine.  In addition, feel free to share this link on social media and spread the word.  Readers may contact me with questions (via the CONTACT button in the tool bar.  If you are a PowerLine reader who has been banned by Chief Hypocrite Scott Johnson, please contact me.  I am interested in your story.