The Revolution Has Finally Come for You 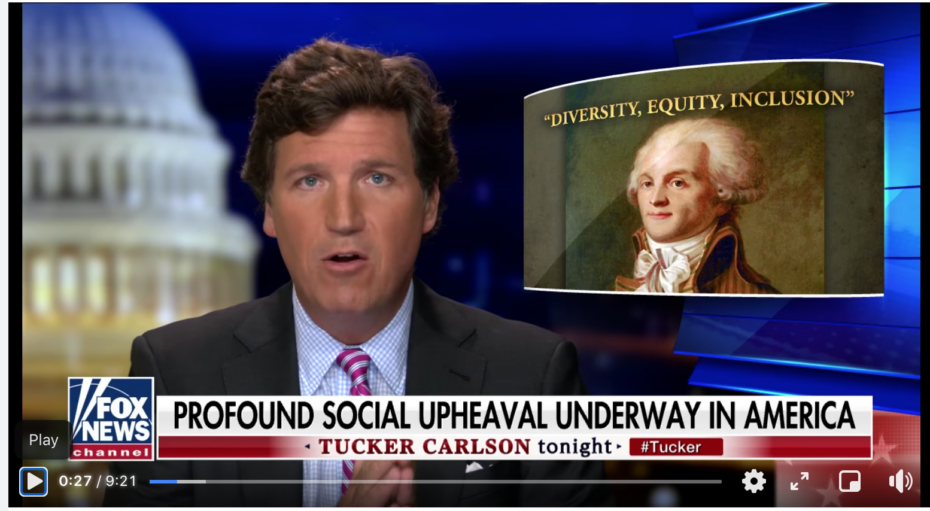 The hypocrisy of Scott Johnson and his colleagues at PowerLine Blob has been documented by this website.  But it’s a big, target-rich world out there for hypocrisy (read “Woke”); and in a recent 9-minute monologue Tucker Carlson outlined a superb battle plan to deal with those who call for social change under the aegis of diversity, equity and inclusion.

Wonder what the number is for the average Dartmouth student?  Scott Johnson, John Hinderacker and Paul Mirengoff are graduates of Dartmouth College; perhaps they know.  Eliana Johnson, daughter of Scott Johnson and editor-in-chief of The Washington Free Beacon, is a graduate of Yale.

Why should this arrangement continue? Carlson challenges.  Ivy League universities could afford to educate poor kids; they choose not to, and no one has any plans to change this.  But Carlson has a plan.  Since Joe Biden wants to grant citizenship to 30 million illegal aliens in the US, why shouldn’t the children of impoverished illegal aliens go to places like Duke, Cornell, Princeton?

“Beginning immediately, the top-ranked 50 colleges and universities in America should be prohibited, by force of law if necessary, from accepting students whose parents or grandparents went to college. No more rich kids. Harvard should be reserved for students who’ve never experienced the many advantages of living in our ruling class.  If you’re for ‘diversity, equity and inclusion,’ there’s no faster way to achieve it than this.”

He adds:  “The Woke professional class at the NYT and elsewhere are about to find that their own rules might actually apply to themselves…. For years you thought you had an exemption to the rules you made.  Sorry the revolution has finally come for you.”

Not only is this Justice, Carlson has laid out a wonderful model that any of us can apply at various levels.  For example, Coca-Cola’s much reported “diversity” training that included the theme “Try to be less white.”  Supposedly the course has been pulled, but who knows what will follow now that diversity is theology.

Letters can be sent to any corporation’s board of directors asking about the risk to the brand with such programs.  We expect leadership by example.  In the case of Coca-Cola, for the sake of this example, their executive leadership team comprises nearly 40 individuals.  Most look quite white, including the “white Hispanics” as coined by NYT.  How many of these “executive leaders” were assigned to take the course?  If not, can we expect each “leader” to issue a personal statement of how they are working to be “less white?”  And how will they measure their success?

And as we complete this circle of inclusion — as an option — how many executive “leaders” will strive to be less black, less Asian, and so on?

Call to Action:  This could get to be a habit!!